"How to end Boko Haram"

Osun State Governor Adegboyega Oyetola has said that a blend of active and soft forces is required to win the war against insurgency and restore an enduring peace to the country.

He advocated collective efforts in the fight against the raging insecurity in the country, noting that collaborative effort and patriotism remained the required tool for the military and civilians to win the war against insurgency.

The governor spoke even as the Chief of Army Staff, Lieutenant Gen. Tukur Yusuf Buratai, restated the readiness of the to end the raging security challenges by leaving no stone unturned in curbing criminal activities and ensuring general security.

The duo spoke on Monday at the 10th edition of the Social Media Seminar organised by the Department of Civil-Military Affairs in conjunction with the Security Affairs Limited for social media influencers, bloggers, online journalists and members of the Civil Society Organisations, at Aenon Suites and Hotels International, GRA, Osogbo, Osun.

Describing security as sine qua non to sustainable democratic governance, peace, unity and stability of any nation, the governor lauded the vision of the leadership of Nigerian Army for engaging in military-civil relations activities to foster cordial relationship as part of the non-kinetic operations designed to improve military operations.

Extoling the theme of the seminar, “Civil-military relations: The evolving role of the social media in support of the Nigerian Army’s non-kinetic line of operations”, Oyetola said the seminar came at a challenging time when fake news is menacingly fueling insecurity and hampering the modest efforts of the military.

According to him, the seminar would go a long way to offer a potent platform for the military who has responsibility to secure the territorial integrity and security of the nation and social media practitioners who have a duty to hold the military and other agencies to account to address grey areas that are capable of compromising security, endangering the public interest and hampering professionalism in the public interest while also collaborating on professional areas that can be mutually beneficial for the nation and their respective professions. 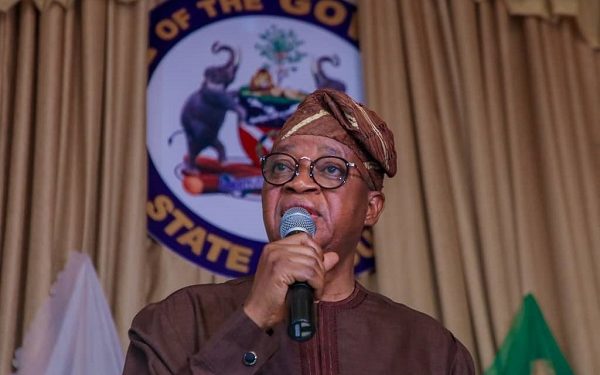 The governor, who noted that the statutory duties of the military and the media are complementary and that both have responsibilities for the peace and wellbeing of the people, stressed  that the seminar came at a time the social media is evolving as a medium of huge global reach and strong capacity for moulding opinions in a technology-driven world.

He said: “Communication is central to military and security operations. It has the capacity to make or mar security strategies and operations and consequently secure the nation or expose it to jeopardy.

“This realisation makes it expedient for the military and media practitioners to constantly collaborate to interrogate their operations in the national and the public interests.

“It is therefore gratifying that the Nigerian Army has organised this seminar to provide an avenue for it to enlighten the civil populace about its activities and to collaborate with social media practitioners to seek their cooperation and to curb the fake news syndrome that is cancerous to military operations.

“With this seminar, the Nigerian Army has proved beyond a doubt that it recognises the need for a holistic method to restore peace and security to the nation.

“The non-conventional and militia nature of the nation’s raging insecurity makes collaboration between the military and the civilian expedient, especially in a world heavily driven by technology.”

The governor urged social media influencers to make peace and the public interest their watchword and uphold the value of journalism which includes truth, balance, public trust, objectivity, impartiality and abstain from fake news and unverified information which are capable of compromising the nation’s security and interest.

Oyetola commended the COAS for his huge support for Osun and the southwest states in their efforts to secure the state and the region.